One thing I’ve not done much of so far is talk about whole rooms. If I’m honest that’s a lot to do with the limitations of iPhone photography, and the challenge of getting a picture which properly illustrates the layout. But we get a lot of compliments about the loft so I thought it would be worth talking how we planned it and what we were hoping to achieve.

A lot of the deliberations I touch on here actually took place at the old house, as we pretty much replicated the design from one house to another. And they were also informed by some sage advice from the company we used, Bespoke Lofts.

The first decision we was whether to just convert the loft at the front of the house, or to go for an L-shape which maximised the space allowable under permitted development. The latter option was about 30% more expensive but would give us  nearly double the space. It seemed worthwhile on that basis alone, but became more so with the realisation that since the rear could be built out as a dormer box it would all be full height, whereas the front section would necessarily have a sloping ceiling.

Many people who go for this larger option aim to boost resale value by incorporating two bedrooms and a bathroom, and if you have a large family that obviously makes sense. But we knew we were sticking at two kids, so our aim was to free up a spare bedroom downstairs, and make ourselves a sanctuary up top.

Key ingredients included a space to sit and read, a bath for the occasional luxury soak and a decent amount of wardrobe space. Previously the downstairs front room had been our bedroom and like many people we’d improvised wardrobes from the alcoves, but it had always felt like a slightly cramped compromise. 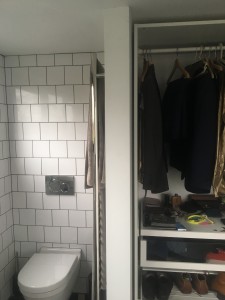 I also hankered after beautiful cedar-lined fitted wardrobes, but the budget didn’t allow. So rather than making the wardrobes to fit the space I made the space to fit the wardrobes. In this case asking our very patient Bespoke joiner and foreman Bradley to make sure that we had exactly 3 metres available between the front of the room and the half wall that shields the loo so that a run of PAX cupboards would squeeze in as if specially fitted. Then we improvised the shoe cubbies ourselves, from some cut down shelves. And, should we ever win the Lottery, I can still commission the cedar to fit the space we’ve got. 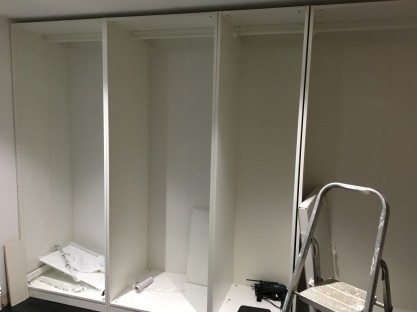 The one big change from the old house was the layout of the windows in the rear dormer, which needed some thinking through. Previously we’d looked out over rooftops, and had windows above our shower and loo, with an inset mirrored cabinet over the basin.

This time though Mark was keen to maximise our views of the Flats, which meant windows all the way along, and two problems. The first being to preserve my modesty, since if I could see out to the Flats then…you get my drift. We addressed this with very some careful measurements and calculations before ordering the windows.

The second was where to store all our bathroom junk. Again, planning ahead was key, with built in alcoves for the things we needed always to hand (shampoo, loo roll, toothbrush (and charging socket)) and an inset cabinet in the far wall for the other bits. 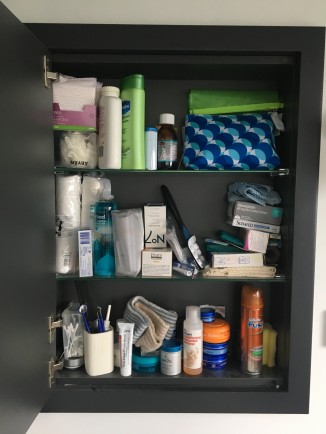 It’s an unexpected bonus that the extra mirror helps bounce light (and views) around the room.