One feature of the house which gets a lot of comment (not always complimentary) is the high level bookshelves around three walls in the back half of the sitting room. I love them as for me they encapsulate the way I approached the house in a single project:

spending much too much time with interiors mags and Pinterest

responding to the unique characteristics and opportunities the house presented

In the old house we had alcoves aplenty, and inevitably they became bookshelves. Two in the sitting room and a jam-packed overflow in the study/ guestroom. I knew repeating this would undermine the properly restful vibe I was trying to create in the guestroom.

At the same time the previous owner’s gung-ho attitude to sitting room chimney breasts had left us an alcove down (and made space for our cocktail cabinet). 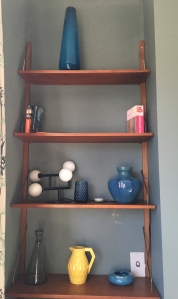 I’d sourced some vintage Danish shelves for the remaining alcoves that would be lost under half a hundredweight of books. The ‘vignettes’ are still a work in progress, but the simple design and warm colours of the system are just too nice to be obscured.

And some travails earlier in the project meant we’d already had to say goodbye to the cornicing in the back half of the room.

The clincher was that, much as we cherished our books, we’d converted to tablets for everyday reading, making ready access less important. So up we went. Still dithering over a library ladder, but meanwhile our vintage kitchen steps do a fair job.

One thought on “Books do furnish a room”