A big moment for the Last House last week, when it started to earn its keep. A referral from a friend (thanks Suz!) led to the kitchen and sitting room starring in a photo shoot for Foxhole Spirits, makers of the delicious Foxhole Gin.

I was at work so Mark was on camera duty for the blog, taking photos of photographers. This shoot was for their new product launch – in March – so I can’t share any shots of the bottle as yet.

We had wondered about putting the house to work as a location for a while – I’d read good things about it, but also nightmare stories of people scraping inch thick layers of paint from particularly popular homes. 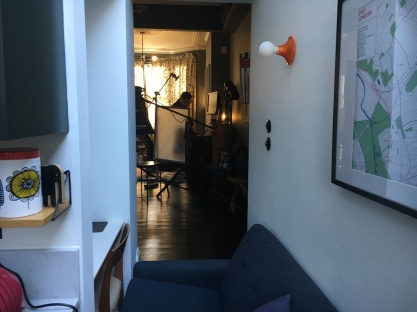 I’m pleased to say that the team (including Foxhole’s James and Donna and specialist drinks photographer Rob Lawson) were lovely and the  house survived the experience unscathed, but it was interesting how different this was to the KBB shoot. This time the product was the star rather than the house, and it was all about using aspects of our space to show it to best advantage. This led to some temporary reconfiguration – regular readers will recall that the sofa isn’t usually located immediately behind our desk!

Some quite unexpected things were pressed into service, including this table which usually serves as our bedroom phone charging stand. It’s lovely but tiny  – the chap we bought it from 20 years ago thought it was probably an exam piece for someone’s joinery apprenticeship. By contrast my cocktail cabinet, which I thought would be the star of the show, didn’t get a look in.

It was great to dip our toe into the water of this world without having to register with an agency,  which begs the big question – would we do it again? And yes I think we probably would. It’s a relatively painless way to earn some extra money (not forgetting that it will need to go on the tax return), and a fun way to get an insight into a more creative world.

2 thoughts on “The Last Foxhole”